Colossus
Marvel Presents Comics
Issue #11
January 1989
“God Country Part II”
This comic was read a few times. It is stored in a poly-bag with cardboard backing. There are no markings or damage to the comic.

This Comic, Colossus Issue #11 Marvel comic,  is part of the Marve Comics Presents Series. The comic book is a special event title “God Country Part II. ” The issuing date for Colossus Issue #11 was January 1989. The purchasing of this Marvel comic book, The Colossus comic is from a reputable comic shop. The comic book is in a poly-bag with backing.  The grading of this comic, as well as any comic on this site, is not by a professional grading establishment. This is the original comic, not a reprint. 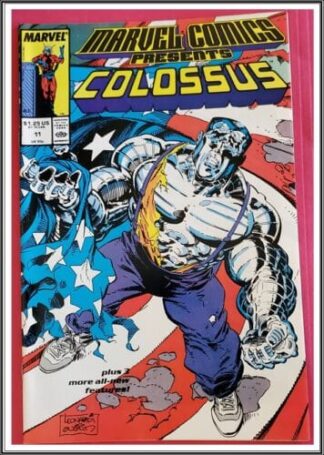 You're viewing: Colossus Issue #11 Marvel Comics Presents January 1989 “God Country Part II” $5.85
Add to cart
Select the fields to be shown. Others will be hidden. Drag and drop to rearrange the order.
Click outside to hide the compare bar
Compare
Compare ×
Let's Compare! Continue shopping
1